← more from
HELLS HEADBANGERS Records & Distribution
Get fresh music recommendations delivered to your inbox every Friday.
We've updated our Terms of Use. You can review the changes here.

Children of the Atom 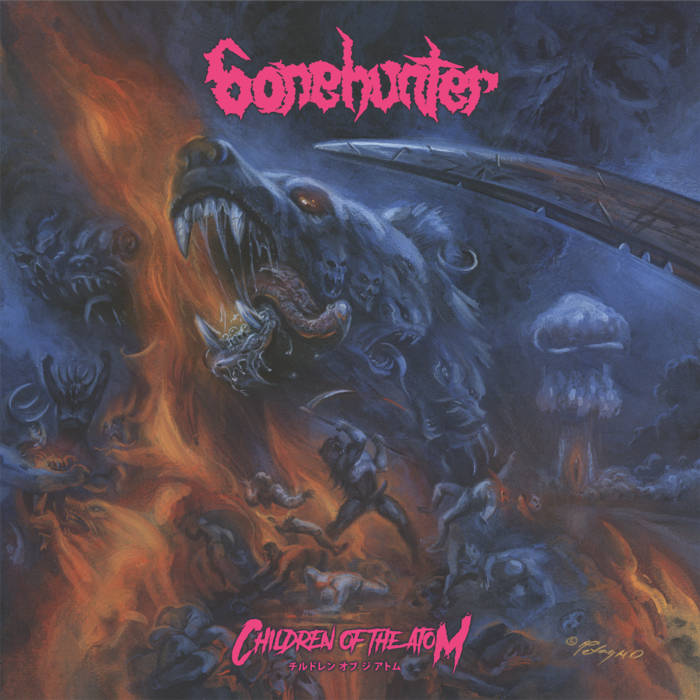 Electric Messiah These dudes absolutely slay! Crusty, fast and throat ripping vocals make you want to start a pit in your living room!
They're a new discovery for me and this album was my first time listening to them. An instant purchase after my first listen through! Will be checking out their past releases and looking forward to future releases. Favorite track: Man of Steel.

Jakob Lättman A fucking gut-punch of an album that grew on me faster than a radiation-induced tumor.
Do yourself a favor and pick up this collection of brain-scrambling tracks! Favorite track: Demonic Nuclear Armament.

GENO bonehunter pinned my balls to the wall and broke my neck Favorite track: The Reek of Reaper's Scythe.

FLESH MECHANIC Bonehunter are a true gem among crust punk bands. Children of the Atom continue the band's trend of blackened howls and crunchy guitar sound, though I believe they perfected their production on this album, not sounding too dirty, but not too clean either. The drive of this album is insane, and once the first notes hit, you're gonna wish you were smashing the shit out of things around you. This high-octane punk ripper will claw its way to your heart, I guarantee it. Favorite track: Devil Signal Burst.

If BONEHUNTER's debut album, Evil Triumphs Again, became the first and last word on how to do Bathory worship - and becoming something of a mini-classic in the process, especially after their much-talked-about performance at HELLS HEADBANGERS' Hells Headbash 2 in 2015 - and last year's Sexual Panic Human Machine became the shocking sound of the band asserting their own identity with equally compelling results, then Children of the Atom is BONEHUNTER hitting a fucking fever pitch. It would not be untruthful to say that Children of the Atom is the perfect synthesis of BONEHUNTER's first two albums: the dungeon-bred grit of the debut meeting the streamlined cruise of LP#2, without the faintest hint of self-consciousness nor repetitiousness. But - and this is absolutely crucial - the devilish charisma and unfuckwithable confidence with which the band roll out each anthem after another here bespeaks something else together. Simply, Children of the Atom is the new (and very now) sound of BONEHUNTER breaking into the bigtime.

After the stage-setting "Initiate the Sequence" intro, Children of the Atom literally EXPLODES from the speakers. Charging hard like the veritable post-apocalyptic Road Warriors that they are, BONEHUNTER truly make their self-proclaimed "Devil Metal Punk" a subgenre unto itself here. It's one of those sounds that's immediately familiar - again, earliest Bathory will always loom large - but with a wealth of era- and globe-spanning influences all freely fed into their engine, from '80s Japanese metalpunk to the deepest South American blackthrash, what emerges on Children of the Atom is indeed a mutation like no other. And it's absolutely ADDICTING: hooks upon hooks are doled out effortlessly, inciting possessed headbanging and air-guitaring, and all with a breathless abandon that's a wild wonder to behold. Additionally, BONEHUNTER's rhythmic arsenal has kicked it up a notch or five, as well, hitting speeds previously unapproachable for the band but here delivered with authority and elan. Not to mention that the production's been roughened up again, bloody raw but belying a clarity of intent.

Featuring unforgettable cover art courtesy of the master Joe Petagno, Children of the Atom is the ultimate nuclear assault from BONEHUNTER! A statement from the band reads: "We envisioned an album that sounded like songs written by the synthetically-revived cadavers of Chris Witchhunter, HIDE, and Petrus Steele after blasting Sacrilege, Atomkraft, and Immortal in a military bunker through the heart of a nuclear winter. Läjä Äijälä, frontman of the infamous hardcore act Terveet Kädet, gave birth to the intro track 'Initiate the Sequence.' The only man who could be trusted to handle the album cover for Children of the Atom was the legendary artist behind Motörhead's Snaggletooth, Joe Petagno. Hails to HELLS HEADBANGERS for helping to spread our noise, filth, and fury and to Läjä and Joe for their contributions! This is the ultimate BONEHUNTER album - turn up the evil!"

Bandcamp Daily  your guide to the world of Bandcamp

Mille Petrozza stops by to talk about the new Kreator album, plus music by Trauma Bond